In 2006 the BBC Imagine series made a documentary following the production of a new play commisioned by The Roundhouse Theatre in London, for the grand re-opening of this iconic theatre venue.

The crew spent six weeks following the cast and the Grassmarket Project production team, documenting the sometimes harrowing journey of a group of young people, disclocated form society yet with a burning hope for what they could become

“Jeremy Weller and his artistic team deal in what might be called theatre Verité – weaving art out of the experiences, words and gestures of non-actors.  The many, often award-winning productions that GMP have mounted across the world between GLAD and The Foolish Young Man are, amongst other things, a rebuke to mainstream theatre, which has largely failed to do artistic justice to the casualties of social and political oppression, breakdown and marginalisation in contemporary society. Perhaps the most visible of these casualties, thanks not least to inflammatory coverage in much of the media and self-serving rhetoric from the government, is that group often labelled as ‘young people at risk’.  Usually this is shorthand for ‘at risk of (re)offending’ – that is, young people heading for prison unless something is urgently done to prevent them – but more broadly it can refer to what we might otherwise call vulnerable young people facing risks ranging from physical abuse and drug addiction to – that unfashionable term – poverty.  In a political culture where a stated commitment to tackling the causes of crime has conveniently been dumped in favour of a ‘populist’ policy of simply increasing the penalties for committing crime, a production like The Foolish Young Man is something of a wake-up call. If it were televised, it could be another Cathy Come Home. I was privileged to attend many of the rehearsals for this new production and to talk to the artists and the young people throughout the process.  I am now writing about that experience and about to research the wider impact of GMP’s work over the last decade and a half for a publication that I hope will confirm the company’s importance to theatre practice.  Too often, work that deals with such realities is shunted off into a comfortable siding marked ‘social inclusion’, as if its makers had intended simply to stick a band-aid on the problem rather than expose it.  In Grassmarket Project’s work, the bandages are off and we can see and touch the wound.” 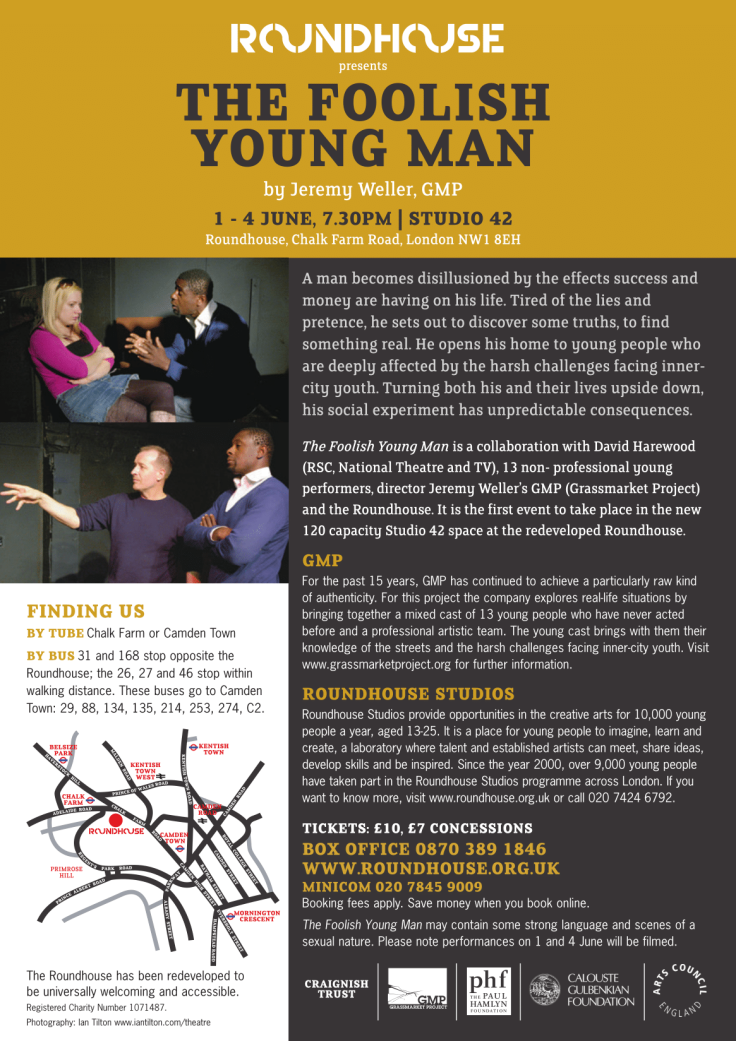